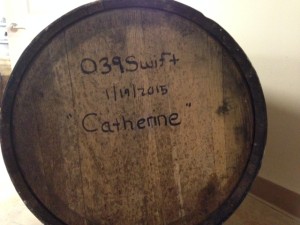 Today is Robert Burns’ 256th birthday and I want to talk about that, but first, a singular honor was bestowed upon me this week and I want to celebrate that with you. Nick and Amanda Swift make single malt whisky in the Scotch style in Dripping Springs Texas.  They just released their first batch in October and I met them and got to taste it for the first time on November 13th, 2014, at Travis Heights Beverage World. It is tasty and holds the promise of great things to come for this distillery. I have been happy to promote Swift Whisky when I get a chance! They recently launched a lovely website, http://swiftdistillery.com/ and our meet up group has a “sold out” tour scheduled for February 7th, 2015.  We will cap off the tour with an event at Péché where we can try some cocktails they have made with Swift Whisky! http://www.meetup.com/AustinScotchLovers/events/219812954/ On Friday, Amanda emailed me the above photo and told me that Nick and she had named one of their newly filled barrels after me to thank me for helping them promote their business!  I nearly bust into tears and definitely had to take long slow breaths to calm down! I mean, a whole barrel of single malt named after me?! I am so humbled and grateful! Thanks Amanda and Nick so much! And if that wasn’t enough, I am also promised a bottle from the cask when it is ready! I am just over the moon about all of this and I thank-you all so very, very much!

I am no expert on Robert Burns, but, like most people, love his greatest hits, “Auld Lang Syne”, “My Love is Like Red, Red Rose” and “Comin’ thro’ the Rye”! In fact I grew up with a childhood album of my father’s called Chipmunks Around the World which featured “Comin’ Thro’ the Rye” as the entry for the Chipmunks’ trip to Scotland. Alvin directs his brothers to different instruments while Alvin borrows the “octopus” from the bagpiper and they proceed to rock and roll the tune to the ever present disgrace of Dave who yells, “You just can’t ruin a great song like that…bring back that octopu..bring back that bagpipe…ALVIN!!!” After traveling to Scotland in 2009, I fell deeply in love with the country and started my love affair with Scotch whisky which has led me here. I really liked Scotland before, but now I am very committed to this relationship. Another aspect of Scotland I love is Scottish Folk Music. Really, all of this is very new to me and I do not claim any expertise – just a great enjoyment of the pleasures the Scottish music, the people, the scenery, the food, and the whisky all bring to me. So out of all this one naturally encounters Robert Burns.  He was a great lover of Scotland, Scotch whisky (which he would just call whisky as there was no other, hee hee), Scottish people, food and Scottish Folk Music.  He collected songs and helped publish them.  He used old tunes to create some of his famous songs, like “Auld Lang Syne”, and helped preserve these treasures for all time through his poetry and song. So, if you pay any attention to any of these things, you will invariably hear about Burns Dinners or Burns Suppers being held to celebrate Robert Burns’ birthday all over the globe. Last year one of the first whisky events I ever attended was Twin Liquors “Burns Dinner” at the Hancock location. It was basically a Diageo Classic Malt tasting given by the Whisky Master, Theresa Menendez. The whisky tasting as terrific, but a Burns Dinner it was not. This year our new Twin Liquors in Round Rock offered a Burns Dinner with some fine presenters, Evan and Rebecca, giving us Glenfiddich and Balvenie to sample, with some great food from Foodapalooza food truck catering. But reading an excerpt from “Scotch Drink” doesn’t really make a Burns dinner, even if it is great excuse to drink Scotch!

But I am digressing, being distracted by Scotch as is my tendency. In starting to seek out Scottish music, I found “Across the Water” a now defunct wonderful radio show by Ed Miller on KUT, then at KUTX. But don’t despair – Ed Miller has a new show on Sun Radio called “Across the Pond” and can be heard every Sunday from 6-8pm. http://sunradio.com/across-the-pond-with-ed-miller/ Ed has introduced me to the delights of Robin Laing and Jim Malcolm, among others. I will write more about them in another post, but they have recorded Robert Burns songs which expanded my knowledge of Rabbie and increased my interest.  Today, in honor of the Bard of Scotland, let me share a few tidbits. One of my favorite facts about Robert Burns is that from his 12 surviving children there are more than 600 people who claim descendancy from him! He was quite a lover of women and broke many hearts. “A Fond Kiss” was written as a farewell to woman and is sad and beautiful. “My Love is Like a Red, Red Rose” is also a farewell song, but many people don’t see this and use it in their wedding!  Don’t do that! Michael Jackon, JD Salinger, Abraham Lincoln and John Steinbeck are all influenced by him! He died much too young at 37 from a rheumatic heart. So much accomplished in such a short time! Check out this terrific version of “Auld Lang Syne” from Jim Malcolm : https://www.youtube.com/watch?v=ri1-2HDHNwU. “Auld Lang Syne” can be translated to “for old time’s sake” and Jim is using Robert’s tune he intended for this song, kind of different from what most people sing with this song. I just LOVE it!

Well, that is all for my little tribute to Robert Burns! I will share the first stanza from his poem “Scotch Drink” below.  If you want to read the whole thing, check it out here: http://www.robertburns.org/works/84.shtml

Let other poets raise a fracas
“Bout vines, an’ wines, an’ drucken Bacchus,
An’ crabbit names an’stories wrack us,
An’ grate our lug:
I sing the juice Scotch bear can mak us,
In glass or jug.