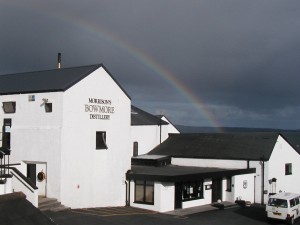 Michael Parker took this photo when he was in Scotland in 2003 and sent it to me this week! He had the fun privilege of living in Bowmore and working at Bruichladdich for a few weeks that year!

This month has been full of terrific events for me related to Scotch and the Austin Scotch lovers. The website is coming along slowly but surely, and many events have been scheduled, with more almost ready to be announced any day.  Our group increased in numbers and Scotch was enjoyed at different locales around Austin. I do not plan to speak of this often, but I will comment here that less than good things happen related to The Austin Scotch Lovers every month, too.  I do not like to focus on those things, but I mention it because I do not want to seem disingenuous and sappy. Some of the unhappy things I deal with every month are:  people do not respond to my emails and phone calls; I meet people who seem happy to join the group and then I never hear from them again; members complain about things; events that I am hoping for do not manifest; people do not sign up for events and they have to be cancelled, and I do not meet my goals for improving the website. Every month I am planning to take stock of the group and website and comment on the progress and maybe allow myself a few complaints or low opinions. I am generally a positive and happy person, but that is only genuinely acquired through honest assessment of myself and the events of my everyday encounters. For my first monthly review, I wanted to speak about this in some detail, but in the future plan just  to tell you about things each month as they come.

One of the highlights of the month for me (that I have not mentioned in the blog yet) was attending a Bruichladdich class at Spec’s at Brodie Lane given by Simon Coughlin, the CEO of Bruichladdich and Douglas Taylor, the Global Brand Director. The presentation was very professional and the stories and banter were very humorous. The room we were in was not the greatest room, in that it was like a prison or other institution with mostly bare walls and the seating was very close to fit in the very large crowd of people who were there. But we were fed delicious food and the men who spoke are so passionate about Bruichladdich Scotch, they sweep you away with them, convincing you that this Scotch is the greatest Scotch ever made. Of course each person who loves Scotch has their opinion of the greatest Scotch ever, and it isn’t really a thing I can definitively answer for me right now. But attending this class made me think about Scotch in the way that I thought about Art History when I was studying it in college – an opinion about art can change when you know the history and context of the art. People frequently comment that modern art is not beautiful or worthy of being called art, and then that opinion can change when they study the life of the artist and the context of the art world they were in at the time – if the artist was innovating, rebelling, embracing, ignoring or creating the standard view of art of their medium and time. Plus, it has been my observation that art is art, often, because the artist says so, and convinces others to say so, too! Bruichladdich is dedicated to a vision of Scotch whisky made as purely Scottish as possible, using the best ingredients, the most craftsman like ways, and with the highest quality of everything that touches it. Really, they don’t just want to be Scottish, they want to be Islay-ish. They are so proud of using only Scottish, and in some cases, only Islay barley.  They use spring water from Islay. They malt the barley in Islay, they mash it on Islay, they distill it on Islay, they age the new make in casks in Islay, they blend it on Islay and they bottle the final Scotch Whisky on Islay! The 65 people who work there are probably mostly native Islay-ers! I don’t know that for sure, but it comes across in the presentation that way. When you interact with Bruichladdich, whether it be at classes like this, or on the website, or in person, it is hard to stay neutral about the whisky! To me, anyways, it seems like this is the only way you should make whisky, at least while I am in the thrall of the Bruichladdich distillery media.

I really love a Scottish musician named Robin Laing. You can check him out at robinlaing.com. He has written more songs about Bruichladdich than any other whisky.  He has an EP of these songs, and he sells an expression of Bruichladdich that is only his! So I fully admit that maybe I am more susceptible to the Bruichladich promotions than the average person. That I can only find out if you tell me how you find the Bruichladdich material. But at any rate, Robin’s song “Black Art” is one of my favorite songs. I am not in the habit of buying expensive Scotch, so the price tag of $260 or so for a bottle of Bruichladdich Black Art makes it unlikely that I would buy it.  But I wanted to taste it, of course. I was intrigued to find out the history of it. This had the effect of which I was just writing, which is that it made it even more desirable to me because the story is interesting, and speaks to me! Jim McEwan, the Distiller at Bruichladdich, is very transparent about the whiskies that Bruichladdich makes. He decided one day that he wanted to go into the vast warehouse of Bruichladdich, this treasure trove of casks full of maturing whisky, and create a whisky that is all his own, that is his secret and can be a creation of Jim McEwan alone. Thus was born The Black Art.  It is an non age statement whisky, like all Bruichladdich, but they will tell you that the youngest whisky in the Black Art is 23 years old. It is a work of art by a master: Jim McEwan is regarded as one of the kings of the Scotch Whisky industry. How he makes The Black Art is known only to him, and even if he told someone how he does it, and they repeated it, it most likely would not be exactly like his creation, as his persona is part of the whole package of The Black Art. All of these things just solidify my opinion that Scotch Whisky is an art form, and can be studied and thought of in the same terms as art. I am sure I will have more to say about this topic in the months to come.

Before I end this post, I want to say a few things about the work on this website. I love the vast amount of information that is available to us on the internet about Scotch, and really don’t want to create another website that is like every other Scotch website.  My main focus is drinking Scotch in Austin, but it is also coming through the lens of my life and personality, because I wanted to make it personal. I do want the website to have some basic information for Austin Scotch Lovers, like basic definitions related to Scotch, and a list of distilleries.  It occurred to me that one way to make the distillery list relevant to my goal was to not only tell people all the distilleries in Scotland, but to let you know where you can try the Scotch made by these distilleries in Austin. I am very excited about creating this, but also a bit daunted.  It is going to take me some time to get this up in a complete form, and I feel that in some ways it may not ever be “complete”, as bars and restaurants come and go all the time.  But I am going to  create it to the best of my ability and work on it steadily. I have more ideas, but these will be shared in future posts as they start to manifest and come to fruition. In all, January 2015 is off to a great start for me, and for the Austin Scotch Lovers, and for that I am grateful!

← Robert Burns but first, Gratitude
What Scotch should I buy? →