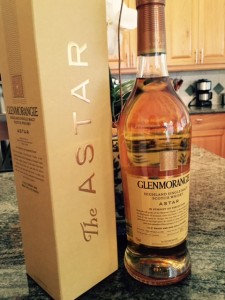 I wrote my last blog post 2 months ago! It is hard to believe it has been that long! I have had some themes rattling around in my head, and then I went to Florida to visit Harry Potter and my family and how I am back in Texas and writing today. I found a somewhat rare Scotch in a small liquor store on Anna Maria Island, Hurricane Liquors. The Scotch is called Astar from Glenmorangie. It was a limited release from 2008, according to what I can find online. I wonder if it has been sitting on the shelf all this time waiting for me to buy it? We cracked it open last night and I am pleased to say that I LOVE it! If you have read any of my other blogs posts, you know that I am not fond of buying Scotch I haven’t tried and I also am not big on Scotch reviews – either to read or write them. It is just that I find Scotch so personal it is hard to really glean what it will taste like from a review and I would definitely say this was true here. To be honest with you, I really debated buying this as it cost around $100 and I had no idea if I would like it. I am not in the habit of buying $100 bottles of Scotch as a rule. More on that below. I saw it one day and went home to read about it online. The descriptions I found talked about the name meaning ‘journey’ and that that referred to the fact that the casks used to age it are made from a porous oak from Missouri, toasted and charred in a secret fashion, used to age Jim Beam for three years, and then sent whole to Scotland to receive this Scotch which is then aged about 10 years or so. Glenmorangie is often interested in experimenting with casks and finishes, but this is unusual in that it is just ex-bourbon and that the casks are shipped whole and not disassembled and reassembled in Scotland. I was uncertain about this as I am not a bourbon fan and often like a sherry or port finish. But I saw many references to this being very “sweet”, a good “dessert” Scotch and “tropical”. And to be honest I had really hoped that since I was getting to explore different liquors stores than my usual haunts, my love of treasure hunting would be fulfilled and I would find something in Florida that was rare, or at least a little hard to find. I looked at some other stores and found nothing at all that fit this description so I decided to take a risk and went back the next day and bought it. It made it safely home with me (in a car) and was the star of last night’s festivities where it was cracked open and shared with some friends. It is cask strength and non-chill filtered, so my mouth had to get conditioned to it, but it really grew on me quickly and I found it to be a great “dessert” Scotch and really tasty and delicious! Ah, what a relief!

You may be wondering why I would balk at paying $100 for a bottle of Scotch. This is, after all, not that much to pay in the world of nice Scotch. Johnnie Walker Blue, Glenfiddich 21, Balvenie Portwood, Bruichladdich Black Art, and Glenmorangie Signet all cost more than $100 a bottle, and some of those cost more than $200 a bottle. All are Scotch I have tasted and enjoyed, and would like to own someday. I worry about getting a taste for Scotch at this level, though, and know that my love of Scotch could start to infringe on my love of many other things in life if I start buying $100 bottles of Scotch regularly! Plus, there are so many delicious and wonderful Scotches at the $50 (or less) level, and I think it is important always to keep in mind the wonder of a 10 or 12 year old Scotch we can enjoy for $40-$60! I guard against getting jaded in my Scotch adventures, because waiting 10 or 12 years for something to be ready is actually amazing and the deliciousness of Glenfiddich 12, Macallan 12, and Talisker 10, just to name a few, cannot be overstated. It is very easy once you immerse yourself in the world of Scotch whisky to get very carried away by seeking out the rarest, the oldest, and the most expensive, and trick yourself into thinking that is all that you should pursue to prove you are a seasoned Scotch lover, and that your opinions are worthwhile. Will people take me seriously as a Scotch lover if I tell them I love Glenfiddich 12? Will I be sought out for my expertise if I say my favorite Single Malt is Talisker 10? God forbid I mention a blend among my regular drams! Dewars 12? No I don’t own that, plus a back up bottle. Who told you that? I am a great SCOTCH lover. How dare you!?! So why, you may be asking yourself, did I spend $100 on this bottle of Astar? Well, I can’t explain it, really, except to say that I liked the description, I liked that it was discontinued and hard to find, and that I really hoped I could bring home a souvenir Scotch from my trip to Florida. I think we all spend more money on a trip for things than we might in every day life. Of course it is not every day we can buy a magic wand that actually cast spells, but that is another story. So, for better or worse, I bought the Scotch, brought it home and am really, really glad I did, because I think it is awesome!

Of course, once it is gone, I probably won’t get to have it anymore. This is definitely the other big reason why I don’t usually want to buy rare & expensive bottles of Scotch, or any food or drink for that matter, because once they are gone, they are gone. It is the ephemeral nature of loving things like Scotch and other handcrafted, handmade gourmet type items. But drink is for drinking, not for hoarding, and I do not believe in owning Scotch and not drinking it. I am very firm in this opinion. For me, having something delicious that I do not drink or eat, but just hold onto, is like owning a pet I never touch or having clothes I don’t wear. It separates me from living life and that is something I never want to do. Life is to be lived, pets to be loved, clothes to be worn and Scotch to be drunk. 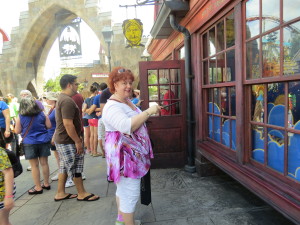 ← What the (bleep) do we know about Scotch?
Scotch by the Numbers →