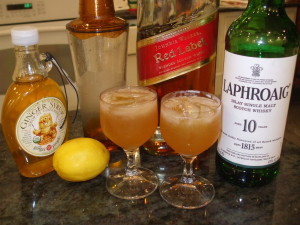 Traditionally, Scotch is not a favorite cocktail spirit. Most Scotches have so much flavor and personality that they don’t like to play well with others. However, as people grow to love boldly flavored whiskies from all over the world, the idea of having a whisky cocktail seems more appealing. Another traditional thought about Scotch and other whiskies is that that they are better suited for cold weather drinking as they are warming to the body. Your iconic idea of drinking Scotch may include a fireplace, a man in a tweed jacket and after dinner gathering of only men. Of course as it becomes a drink that women and men enjoy in all kinds of scenarios all year round, these ideas seem outdated and quaint. I do admit that a dram of Scotch can make me warm, not always a welcome feeling in Texas (it is 105ºF right now), so cool summer drinks like Gin and Tonics and fruity concoctions like Sex and the Beach have greater appeal, even to me! But being the Scotch Lover that I am, I am always looking for Scotch Cocktail recipes and I have collected some on this website (menu above) and also on the meet up site. It is basically the same post in both places. I am adding to it as I try new drinks and welcome any suggestions from other Scotch Lovers!

Probably the most popular and best known Scotch cocktail is Scotch and water, or Scotch and Soda, or Scotch on the Rocks. These are all variations of adding some water to your Scotch and you may not event consider this a cocktail. I do, as I think anytime you mix something into alcohol, you create a cocktail. In my last blog post I talked a bit about adding water or ice to Scotch, so I won’t repeat that here. What I will say is that you should try different types of Scotch you like with ice, or water or soda and see what you think. I recommend using tablespoons and teaspoons and create tiny tastes. If you create a combination you like, you can make a bigger one to see what you think. If you don’t like it, you can either throw it out without much guilt over waste, or just drink it anyways! It is so small! There are three teaspoons in a tablespoon, in case you need to do some math for proportions. Another variation is to add lemon, lime, cherries, or other garnishes that add a bit of flavor. Then, you can get even more variation by using a flavored water like La Croix flavored soda water. Please don’t ever use or eat traditional maraschino cherries. The way these are made and what is in them is awful and it is way worth the expense to buy natural cherries for garnishing your drinks.

Blended whisky is often better in a cocktail than a single malt, mainly because it is smoother and the flavors are balanced and not as pronounced. But in a cocktail that is mainly Scotch, you really want to make sure you use a Scotch that you like the taste of by itself, because it still will dominate the flavor of the drink. The variation in flavors of blended Scotches is quite wide. Single malts are at the base of each blend, and since each distillery makes a different tasting single malt, how could the blends not be all so different! Blended Scotch contains other grain alcohol besides barley, and this adds to the variations in flavor as well. There is another kind of Scotch called Blended Malt. This is solely a mix of single malts, albeit malts from different distilleries. This can also be a good base Scotch for cocktails, and in fact, Monkey Shoulder was created just for that reason. This is a blended malt from William Grant and is a mix of the single malts, Glenfiddich, Balvenie, and Kininvie, three distilleries of William Grant. They developed Monkey Shoulder with mixologists in mind, hoping to bring Scotch more into the world of cocktails.

There seems to be some mixers that work well with the flavors of Scotch, and you see them somewhat regularly in the recipes. Ginger, whether it is a sweet soda, a strong ginger beer or an alcoholic ginger beer like Crabbies is great with Scotch. Ginger syrup, ginger liqueur and fresh ginger find their way into Scotch based cocktails, with delicious effect. Cranberry juice is good, and of course citrus juices like lemon, lime and orange. Sugar is used to good effect, sometimes in the form of honey or flavored syrups like from Torani. 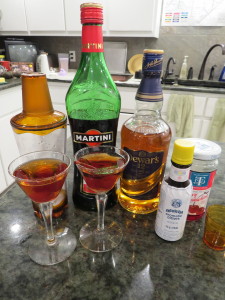 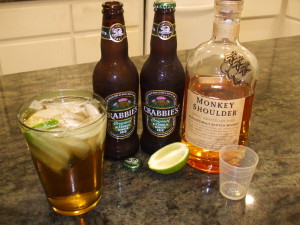 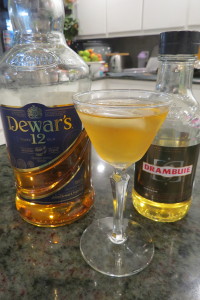 Other alcohol is a great partner for Scotch. Drambuie is a liqueur made from Scotch and is a natural mixer for Scotch cocktails. The Rusty Nail is the classic cocktail made from Scotch and Drambuie. Vermouth, both dry and sweet, is also combined with Scotch. The Rob Roy, another classic Scotch cocktail, combines Scotch, sweet vermouth and bitters. Scotch has so many flavors, but often the casks impart vanilla and other sweetness that mixes well with most liqueurs. There is a drink called the Godfather that mixes Amaretto and Scotch to good effect, and I suspect that most any liqueur you like will combine well with your favorite Scotch.

If you have never tried chocolate with Scotch, you have missed out on a great flavor combination. Like liqueur, I think the natural sweetness of Scotch lends itself well to chocolate, and also coffee and tea. These hot drinks put us more in mind of cold weather and so we may not drink them like other cocktails, but I can’t leave them out as they are great partners with Scotch, sweeteners and cream.

Scotch can be enjoyed year round and at any temperature. I encourage you to also try it in a cocktail! Here are some great websites for Scotch Cocktails:

Please send me any recipes and Scotch Cocktail websites you like!

← Scotch by the Numbers
Dan Crowell Star of Whisky Dinner →