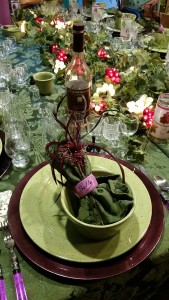 Some of the Austin Scotch Lovers recently were blessed with a private dinner starring Dan Crowell, national ambassador from Ardbeg and Glenmorangie. I wish I had more pictures to share, but we were all so enthralled with Dan that most of us did not remember to snap some photos. Thanks to Joanne for the two I have here! I hosted the dinner at my house and between Dan and me, we had 9 Scotches to try on their own and paired with food. From Ardbeg we had Ardbeg 10, Corryvreckan, Uigeadail, and Perpetuum. From Glenmorangie we had Lasanta, 18, Astar, Signet and 25. I prepared salmon with asparagus and new potatoes, as well as salad and gluten free sticky toffee pudding. We also had some cheeses, olives, chocolates, crystallized ginger, and honey to try with the expressions. The dinner was the evening before Whiskies of the World, Wednesday September 16, 2015. We started around 6:30pm and the last guest left after midnight. I was helped by my husband Steve and my friend Joanne, who came early to help me cook and be ready for the festivities on time!

To say Dan is knowledgeable about whisky is like saying Niagara Falls has some water in it. But having knowledge is nothing if you have no means to convey it to your audience. If I were to type out things that Dan shared with us, besides it becoming a book, you might fall asleep with the nerdy details of it all. But here is the thing – Dan is so engaging, so funny, so irreverent and so animated that you never get bored. I would find myself repeating some of the facts to others and could hear the drone of my voice putting them to sleep. Dan has this magical ability to change the tone of his voice, use his hands and facial expressions and say just the right amount of asides to create a tapestry of humor, Scotch facts and whisky opinions. He is this living search engine where you could ask him about something in the whisky world and he has something to share, to educate you about, and to give his opinion on. Tasting notes; what’s in a this expression; how are blends being changed for better or worse; why do American single malts taste so fruity? (The type of pot stills Americans favor plus the yeast they tend to use). He clearly loves his brands and is a vast repository of the history and future of Glenmorangie and Ardbeg. That would be enough to impress anyone, but then he can talk intelligently and thoroughly about so many other distilleries. He can tell you about chemistry and physics, at least when it comes to making whisky, and then geography, meteorology, marine biology, and agriculture, all components of the gorgeous process of getting malted barley, water, yeast, oak and time to give us this liquid ambrosia. Oh, I forgot forestry, coopering, affects of other spirits on the barrels and what you do to the barrels. Dan Crowell delighted and mesmerized us with his humorous commentary on all of this and more!

I wish I could give you some direct quotes. I was in constant motion serving food, eating, drinking Scotch, clearing plates, and listening while Dan just gave us one of the best classes I have ever attended. So I cannot easily pull out something verbatim. He told us about each expression, what tastes people typically found in each Scotch and suggestions of what foods to try with each one. The Lasanta was our first pour, a nice easy dram to get the night rolling. We savored the sweet sherried notes, warming our palates for the feast to come. We marveled at the 18, how 6 more years and no chill filtering creates a spirit so different from the original, yet can retain the signature Glenmorangie taste. Of course there was then a discussion of caramel coloring and age statements. We then tried some Ardbeg 10 and the Uigeadail with cheese and olives, including blue cheese and sharp cheddars, brought by my friends Lisa and Aidan. The smoke and peat was a perfect compliment to the flavors of those cheeses. My beloved Astar was next up, the cask strength pleasing some and begging for water from others. We were eating our salads and main courses during all of this, asking questions and enjoying the feast of flavors from the whisky and the food. I never stop marvelling at how good Scotch is with dinner, and how many different flavors you can coax out of the same dram! Perpetuum was next tried, going with different foods for different people. As you can tell, we had a very casual and light atmosphere, allowing food and whisky to flow freely in whatever combination the guest chose. I enjoyed some crystallized ginger with the Perpetuum; the contrast of flavors was intriguing. Sweet, sting of spice and then an envelope of smoke and charcoal surrounds it and causes your mouth to question its existence. There were many affectionate recollections of other Ardbeg special releases and talk of Astar maybe coming back if Dr. Bill Lumsden could have his way. Dan told us about Dr. Lumsden’s eternally inquiring mind, and his curiosity and dedication to research when it comes to Scotch. When dessert and chocolate were served, then Glenmorangie Signet and 25 were the stars. Signet is renown for its chocolate roasted barley that gives it a natural place at the end of a meal. The combination of actual chocolate with this Scotch explodes in a cascade of flavors that almost knocks you out it is so sensuous. It puts me in mind of what eating in heaven might be like. But then I tried the 25 and I was just speechless. I thought, I must get some of this – it is unreal! Then I heard it sells for about $700 a bottle, so I just poured another dram or two and savored it to the best of my ability. It is smooth, sweet, vanilla-y, and full of Scotch deliciousness. It caresses your mouth, and I tried to stay in the moment with each sip, but found myself longing for the next second when another fresh dose would be sipped. It is the risk I take in trying expensive Scotch – it is hard not to start imagining what I could sell and give up just to be able to buy a bottle! It was, of course, complete perfection with the sticky toffee pudding. Dan could tell you what is happening on your tongue when the sugar and cream of the toffee sauce mingle with the magnificence of the Glenmorangie 25 year old Scotch, that elixir that was made and bottled half of my lifetime ago, sitting in Scotland dreaming of making its way to Texas in September of 2015 just to seduce me and make me forget about any other Scotch I know. At least for an evening! Thanks Dan, for contributing to my potential debauchery.

Even as some guests departed, the conversation continued. As is manna from heaven for Scotch Lovers, there were debates and gentle disagreements about best Scotches, distillery practices and what Diageo is doing to Johnnie Walker Blue these days. I think if we had no obligations the next day, we could have talked all night! As it was, my darling husband managed to help me get much of the table cleared and the kitchen ready for its massive cleaning the next day (including washing over 100 glasses by hand) before it was all over that night! Speaking of my husband, Steve is not a big fan of Scotch, but stayed as engaged as all of us the whole night. I really could not have pulled off the evening without him, and I salute him with all of my heart!

Dan, you are the hands down favorite of the Austin Scotch Lovers after this night. Your kind and generous heart shines through in your very presence, and we can’t wait until we are blessed by a visit from you again! We are filled with gratitude for you. You shared your true passion with us, validating your argument that an American Brand Ambassador is not meant to be a Scotsman in a kilt, but a whisky geek in a three piece suit! Thank-you and Slainte!! 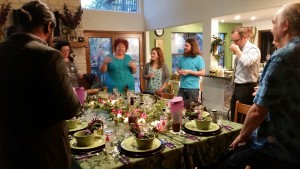